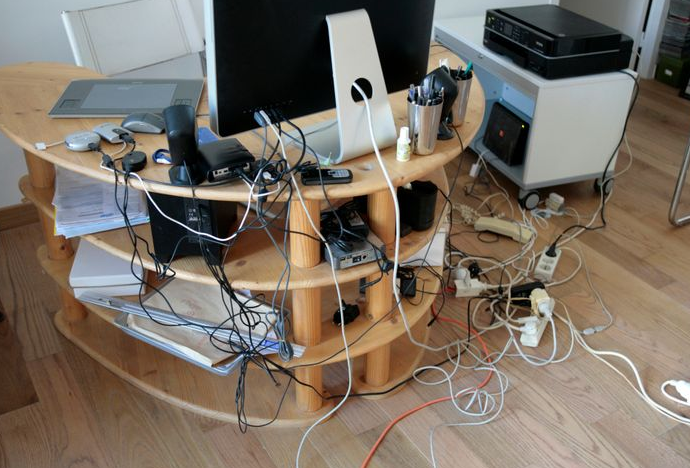 The picture above wasn’t taken in my room, but it could have even been taken a few years ago.
The most important “accessory” for the operation of the technology around us is the electricity. Even though wireless power transmission has been around for some time (I’m thinking here of the wireless charging available on cell phones), it still only works in the short term and has limited performance. Monitors, computers, printers require a cable connection – although given its technical development, it is not possible to say what solutions will be available in a few months or years.
In addition, there are wires to connect different devices – USB, ethernet, audio and more. Despite the growing prevalence of wireless connectivity, I am thinking here that today most printers can be connected via WiFi, Bluetooth voice transmission is not special. Devices that do not have this feature or the user prefers a wired connection will retain the cable connection.
Think of it as an ordinary case, a user has a desktop computer, a printer, used to Skype with relatives living abroad.
The following wires will be connected to the computer:

In addition, the monitor also needs a power connection, the printer and if you use a speaker, it also requires some power. Also, there are the connecting cables between the devices and the computer. In addition, 4 pieces of 230 V connections are required near the devices, which in most cases is done with an extension or power distributor cord.
There are a number of practices we can use to prevent the condition seen in the image above. The best solution for connecting electrical cables is a cable spiral.

As you can see on the picture above, it can be purchased in rolls (meters or inches depending on region), and can be purchased in most electricity stores or DIY stores at a price of 0,3 Euro / m. In addition to the black illustration above, it is also available in white and transparent. If we bundle the cables together, all you have to do is wind them up and hold them together. In addition to keeping the bundle flexible, it makes them more organized. You can form another bundle of other free wires, USB, speaker, and other cables. For drainage under the table – where, for example, the wires of the monitor or the speaker can run, for example, the following can be fixed under the table top:

These are also available for little money, they can be fixed in the desired place with the glue on the bottom. Anyone who doesn’t trust it can even drill it with a short screw. The version on the right is suitable for holding several cables and the left one can hold 1-2 thin wires. The advantage is that it can be released quickly and easily, so that the wires can be threaded in or out if necessary. Also available at electrical and electronics stores. A slotted cable duct can also be a good solution (see below), but it’s more of a product for industrial users, I know it’s not cheap either – but if someone can get it cheaply, it’s also a good solution for under-table cabling.

The conventional cable duct known to many can also be used for vertical drainage.

In addition to the white illustration above, it is available in (almost) all colors as well as different wood patterns, so it exists in almost any version to suit office furniture. “Traditionally” we usually screw the cable duct, but since in our case it is subjected to a lower load, it can also be securely fastened with double-sided adhesive tape if you do not want to drill any of the furniture panels.
If you have a USB extension cable or a cable connected to your mobile phone plugged into your computer, they also have a nice mount, which they keep glued to the side of the table or just the top and keep them handy when needed.

If you don’t want to glue, or just need to temporarily solve the problem of strings hanging next to the table, take a few binder tweezers. When we’re done, we unplug the cable, clip it off the table, and there’s no trace of our previous director anymore.

Don’t forget the cables running on the floor either. Surely everyone has had a case where the free extension cord fell or jerked in a cord with a careless motion. The so-called step-resistant cable duct provides safe hides. It is even in front of a threshold, placed next to a cabinet, we can run the cables in it. It is divided into several sections, so the electrical, communication and other wires can run in separate sections.

If you are about to renovate your home, you may want to consider using plastic floor edging. It can also be used for laminate flooring, decking, parquet, PVC flooring and is designed as shown below to be able to hide some cables.

The electrical connector can also be hidden, there are a number of solutions for this as well, but here we reckon that they do not fall into the penny category. A hidden distribution column or an energy column that can be built into a table can be several 10 thousand forints.

A distributor can be a cost-effective solution, but here we must take into account that they must be fixed with screws. On the one hand, due to the electrical cables hanging in them, and on the other hand, it is not recommended to glue it due to the weight of the device itself (unless you have something very-very strong glue).

Of course, in addition to the above ideas, we have hundreds and thousands of supplements to choose from. The use and combination of these is, of course, limited only by your imagination.

58 thoughts on “Taming of your cable jungle”