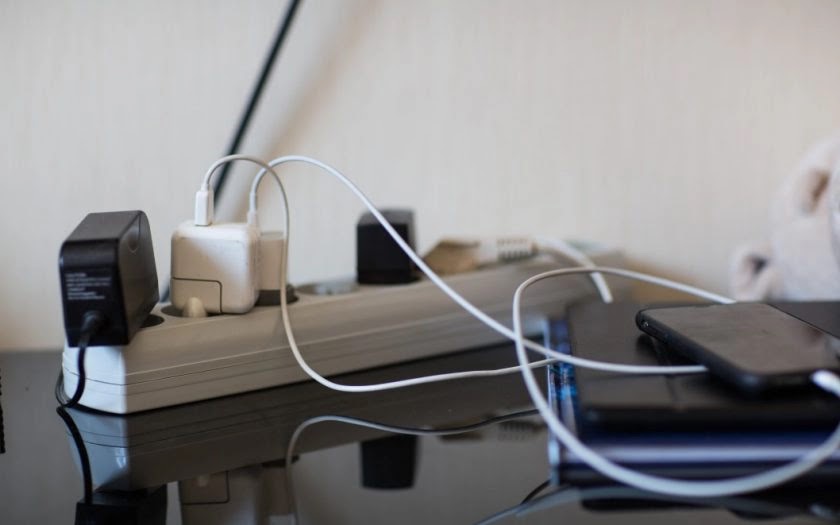 Small, wired and everyone has it. What is that? Charger! Mobile phones, laptops, smartphones, tablets and more could go on with the devices that are always with us and available thanks to their built-in battery. However, sometimes just as we humans need some analysis, so does “them” have some power.
It pulls out, plugs in, when you finish pulling out, roughly as much as an average person deals with the charger. Probably many have not even noticed how much information such a tiny device carries. Let’s look at an average piece:

You can see a common laptop charger is shown on the left and a mobile device’s charger on the right.

If we look at top of the side there is shown the manufacturer’s logo (on the pictures DELL or Samsung).

We will also find the exact type (after the word Type or Model) of the charger which obviously identified the device itself. It is useful when you want to order an another instead of it.

Additional important information can be found after INPUT, here the manufacturer indicates the mains voltage at which it can be used (this link can be found on the page, broken down by country, where the mains voltage is used). It’s a good idea to find out before you go on holiday, avoiding being able to charge your favorite devices. In addition, you should check the plug / socket standard used in your country (Wikipedia link) and, if necessary, install a travel adapter. In the same block we find the mains frequency (50 and / or 60 Hz) and how many amperes the device consumes at most.
Tip: Multiply the voltage and current to find out how many watts of power your device consumes while charging your device.

The voltage and current value read after OUTPUT refers to how many volts and amperes the charging current and voltage. Almost all mobile phones can be charged with 5 volts (in the case of fast/quick chargers it can be 9 volts), in general 1 amp is common, but in the case of the fast charging it can also deliver a higher current.

The date of manufacturing and country of origin are also indicated, as the unique serial number of the device.

The manufacturer also indicates which polarity (positive, negative or grounding) is attached to the contacts of the output connector. In the image above, for example, the inner connector is the positive side and the outer around it is the negative.
In the case of a USB charger, this is not usually indicated, as the pin assignment is defined in the standard as follows (current flows through the Vcc – GND and + 5V – GND pins):

If we look further, there is an another impressive symbol:

the CE marking. The CE (Conformité Européenne = European Conformity) marking roughly means that a product meets the requirements which apply to it (European Commission Directive 93/68 of 22 July 1993). The manufacturer of the product bearing this marking is familiar with these requirements, and these have also been taken into account during the design and production of the product.

This notation means that the device has double or reinforced insulation agains electric shock. The parts to be touched are either made of plastic or the metal enclosures are insulated from live parts in such a way that a dangerous contact voltage cannot be applied to these enclosures in the event of a single fault.

The marking of this symbol has double meaning – devices with such markings can be used indoors and are intended for home use, ie their use under industrial or heavy loads is not permitted.

the device has built-in overcurrent protection. This means if a current greater than that indicated passes through it, the fuse or circuit breaker in it protects the device from possible damage.

a Roman numeral inscribed in a circle, IV, V, VI.

From 2008, instead of the Energy Star mark, the IV mark has been used on electricity consumers whose energy consumption complies with the regulation. The higher this value, the better its energy efficiency.

a stylized letter S and is usually (but not necessarily) listed under the name Intertek. Intertek is an independent international testing and certification company. Certain manufacturers entrust this company to inspect your product in accordance with applicable laws and regulations, and if you successfully pass the tests, the product may wear this logo. Important to note: This is not mandatory for marketing, but where we see this symbol, we can be sure that the design and operation of the device is 100% compliant with all kinds of specifications (technical, technical, quality, etc.).

The following symbol has a similar meaning:

the UL (within the circle), an abbreviation (and logo) for Underwriters Laboratories, they are known primarily in the USA, while Intertek is a European company.

The following logo can be shown on a device that has successfully passed the tests performed by the German company TÜV. The GS logo stands for “Geprüfte Sicherheit”, which means certified safety. The VDE logo on the right is intended to indicate compliance with VDE (VDE Verband der Elektrotechnik Elektronik Informationstechnik e.V. – German Association for Electrical, Electronic and Information Technology) regulations.

Other countries’ signs, which also can be found on various devices:

The different technical regulations (see the country name below the signs) and standards of each country (EU or non-EU), the display of which means that the product can be placed on the market, can be operated in the territory of the given country, because it is in accordance with local regulations.

compliance with US Federal Communications Commission regulations. It is also often stated in the text that 1.) the device does not cause harmful interference, and 2) the device may be subject to external interference that could cause unpredictable operation.

2 thoughts on “Charging IT”

This site uses Akismet to reduce spam. Learn how your comment data is processed.