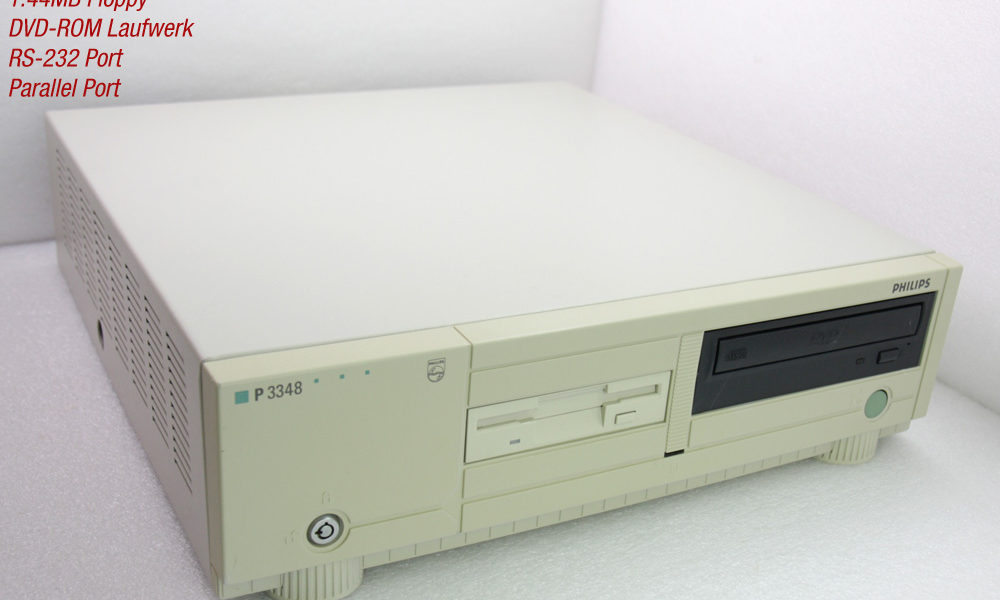 I recently visited my parents where I found my first computer.

I got this machine back in 1998, unfortunately it wasn’t too modern even then, but learning was perfect. It came to me in the company of a 14-inch monitor.

Unfortunately, during the years in the cupboard, its exterior was heavily worn, its cover was yellowed, so I would rather not to show it. The image above, on the other hand, represents a exactly the same model.

Mine had 20 MB of memory thanks to the expansion 🙂

It can be seen that a floppy drive and an optical drive could be built in. There is also a lock on the bottom left, which if you pointed towards the open padlock, you could open its cover, but if you pointed it towards the closed padlock, this could have been prevented. Between the floppy and the CD drive is a small black bar, an indicator on the HDD, that is, when a write or read operation has taken place, it flashes orange. At the bottom right of the turquoise circular switch is the on / off switch button.

On the left side is the grille of the power supply fan, next to it the lower of the two black connectors is the main power input, the upper is a bypass connector, via this connector for example a monitor can be powered.

In the bottom bar, the peripheral connectors, from left to right:

Meanwhile, the spider also moved in

At the top left of the image is the slot for the expansion cards. Three ISA cards could be installed.

10 Mbps ISA network card. Anno that was the top speed of communication.

Next to it on the right is the power supply, which had a power of 200 W. This capacity was plenty for the machine, even if we expanded it in every way possible. Many video cards today are more powerful in themselves.

The chip labeled CHIPS F82C451 in the center is responsible for the display. It could produce an image with VGA (640 × 480 pixels) resolution. It had 256 kByte of memory (!), So it wasn’t even capable of running more serious games. The MUSIC TR9C1710 chip above it, unlike its name, has nothing to do with music. This is called DAC, so he converts the digitally calculated data to analog, which can then be transmitted to the monitor. The small blocks labeled silver Kyocera are the oscillators, they are needed for the different chips to run at the right speed.

On the left is the previously mentioned keyboard connector, which is a 5-pin called Touchel or DIN connector.

Below, the two black vertical “bars” are the location of the memory modules. Snap-in pieces of EDO RAM each could be modules up to 32 MB each.

To the right of it is the brown square, the location of the mathematical coprocessor (FPU, or Floating Point Unit). This component is responsible for quickly performing floating-point calculations – working with the main processor to speed up the execution of instructions. Of course, if you don’t have this chip on the motherboard, all programs will run the same way, but slower. The 486 processors were the first models to have this unit inside a case inside the processor, and it has been so ever since.

Underneath another curiosity are the chips labeled BIOS EVEN and BIOS ODD, the BIOS chips. EVEN stores even bits and ODD stores odd local bits. Because there are physically two chips on the motherboard, one access can read even and odd bytes from both EPROMs. This allows 16-bit access with 8-bit (EP) ROMs. If you need to place the BIOS in a single EPROM (socket), the bytes must be reassembled in the correct order. These store some basic computer settings, such as time, drive information, port settings, etc. It plays other important roles, such as:

Notice the two larger chips in the lower three-quarters of the image, which are proudly adorned with the inscription 20 MHz, which in this case indicates the speed of the processor. Yes, the two components are called the processor. In those times, there was no need for large heatsinks to dissipate heat — it was enough to make a chip enclosure made of ceramic, which provided adequate heat dissipation.

The two chips labeled CHIPS at the top of the image handle the drives and other devices that can be connected to the computer (such as a keyboard, printer). Between the two chips is a so-called CMOS element (or BIOS element), which serves to ensure that the BIOS chip already mentioned above retains the settings even when the computer is turned off. If you remove it from the socket, you will need to make these settings again, as it will reset to all default settings.

In the middle of the image you can see two multi-pin connectors, the one on the left is for connecting hard disks and / or a CD drive, the one on the right is for a floppy. Care had to be taken to have a red-painted cord on the ribbon cable from foot # 1. If we plugged it in the other way around, it tended not to recognize the drive. The white socket next to it is the power plug, through which it receives power from the power supply.

What was this computer enough for? At that time for everything. When it was released, even Windows 3.11 and Windows 95 were common systems. It can be said that it was plenty enough for version 3.11, it could even run 95 at the adequate speed.